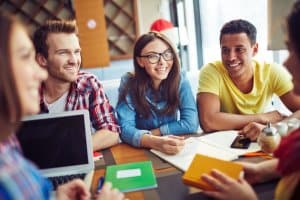 The letter “Z” may be the last in the alphabet. But for multi-housing builders and managers, it signals the start of a new era in which young adults born since the mid-1990s will begin occupying their apartments, if they haven’t already.

They’re called Generation Z, or GenZ for short, and they’re totally different from the population cohorts that preceded them—even Millennials. And apartment professionals need to take notice. If for nothing else, they account for a third of the U.S. population and contribute $44 million to the economy.

Consequently, says Kate Good, a nationally recognized apartment marketing expert who also is a partner and senior vice president with Huntington Residential in Houston, “we have to align our businesses with their values.”

Why bother? If for no other reason, because this generation is 44 million people strong. “That’s a lot of renters,” says Good in something of an understatement.

Realigning to someone else’s values wont be an easy task, Good said in a fast-moving half-hour presentation at the recent International Builders Show in Las Vegas. For example, you might have to reconfigure your leasing office to attract GenZers, who grew up with technology and “want to do everything online.”

“Leasing offices need to be quick,” the marketing expert said. “If you don’t grab ‘em in 15 seconds, you’ve lost ‘em. They’ll hang up within 17 seconds if no one answers the phone. They like brick and mortar, but they do all their research on their phones.”

She said that this youngest population cohort, whose first telephones were smart phones, wants “instant approvals,” so leasing agents “must get better.” GenZers “don’t understand why it takes three days” to find out whether they’ve passed muster and can move in, she warned.

Marketers also must do a better job if they want to attract this group, according to Good. They’re the most diverse generation and they are extremely open-minded,” she said. “They’re collaborative, in control, unique, authentic and inclusive.”

Not only should landlords take on social projects, they should promote the fact that they do so,” she also stressed.

“You should use it in your advertising. They want to participate in social campaigns and want to engage companies which work for the social good. So do it, and make sure Generation Z knows you do it and use it in your marketing.”

Toward that end, Good cited a couple of examples from Denver. In one case, a landlord donated 500 pairs of shoes collected from tenants to needy children. And in the other, new residents who were given a $300 gift card at move-in were asked to voluntarily donate $100 to any of three charities. It was their choice to participate or not, but everyone did.

If you want to attract GenZers, your product has to be different, too, she told a standing room only crowd. GenZers are concerned about price, of course, she said. But they’ll choose location over square feet. “They want to be in the hot neighborhoods, but they don’t need loads of space.”

In downtown Houston, for example, there’s already a long waiting list for units in a building that has just broken ground. The units will range from 380 to 500 square feet at rents running from $950 to $1,250.

And at one Seattle property, what would normally be a business center everywhere else is now an escape room where occupants can mingle and share. “It’s a social room,” Good said. “It’s a necessity when you live in a 500-square-foot apartment.”

GenZers may not necessarily want space, but they do covet amenities that fit their lifestyles. “Amenities are key,” said architect Sanford Steinberg of the Steinberg-Dickey Collaborative in Houston. “It doesn’t have to be big stuff,” he said in a separate presentation.

Turn your clubroom into a multipurpose, 24-7 room where tenants can hang out and “feel a sense of belonging,” Steinberg suggested. Or rather than a pool, how about a beer garden?

Business centers can become coffee centers where tenants read the morning paper or work on their computers, he also proposed. Set aside a room for bicycles, where tenants can repair them and store them. Consider dog washing facilities or turning your rooftops into view areas. And add parcel delivery space in your mail room.

Some places have gone so far as to offer free tech-support for the young tenants by bringing specialists on-site, the architect reported. “When a prospect asks how many bars you have,” he mused, “he’s not talking about what’s on your windows.”

Syndicated columnist Lew Sichelman has been covering the housing and mortgage sectors for 51 years. His work appears in major newspapers throughout the country. He also has been the real estate editor of two major Washington, D.C., dailies and spent 30 years on the staff of National Mortgage News, formerly National Thrift News.