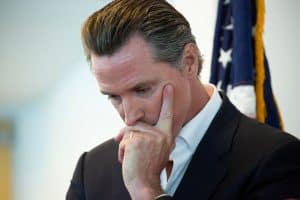 Gov. Gavin Newsom Wednesday laid out enhanced efforts to speed up rental assistance to reeling landlords and tenants, urging a quicker turnaround for aid requests and encouraging more participation in the $7.2 billion program.

Relief efforts launched in March by the state and large cities have been hampered by complex applications, slow processing and complicated rules and regulations. The state last month extended an eviction moratorium through Sept. 30, hoping to stem widespread displacement of tenants unable to make payments during the economic hardships of the pandemic.

Newsom said at an appearance in Los Angeles Wednesday the state has improved the aid process. More than $1 billion has been requested from the state by nearly 109,000 tenant and landlord applications. But only a fraction of the total — $158 million — has been paid out, according to state data, leaving many in limbo.

Newsom said the state has improved its website, Housing is Key, and added more community partners to reach poor and immigrant communities. He cautioned the risks from the virus and economic upheaval remain throughout the state. “This has been an incredibly challenging 15 months and we’re not out of the woods,” he said. “COVID is not taking the summer off. It’s not behind us.”

The governor also urged unvaccinated residents to get shots as the Delta variant of the virus has begun to sweep through unprotected communities. About 40% of the new cases state officials have tested are the new, more contagious viral strain, he said.

The economic battering from the pandemic continues. Bay Area unemployment levels are twice pre-pandemic levels, with low-income workers in service jobs taking the brunt of the pain. Local rents fell as much as 25% during the last year, but have recently creeped back toward early 2020 prices.

The patchwork of programs administered by the state and large cities reimburses eligible landlords for unpaid rent from low- income tenants dating back to April 2020. The $7.2 billion effort includes $5.2 billion in federal relief aimed at lower income tenants. The state has promised landlords full reimbursement for rent missed due to COVID hardship, and $2 billion in supplemental state funds to cover unpaid utility bills.

Officials at the state Business, Consumer Services and Housing Agency are aiming to send funds out within 30 days of receiving a completed request — a standard many landlords and tenants say was not met for early applications.

The state relief program has served nearly 11,000 families, with an average grant of $14,500. More than 8 in 10 applicants are making less than half the median income of their communities — about $50,000 to $60,000 for a family in the Bay Area. Data for individual cities and counties are not included in the tally.

The state has streamlined the online application process after complaints from tenants and landlords that the documentation took hours and sometimes help from social workers to complete. Many large cities, including San Jose, Oakland, San Francisco and Fremont, chose to set up their own relief programs, further complicating the delivery of funds, critics say.

Landlords have waited months to hear updates on the status of their requests.

They have also fought provisions to extend an eviction moratorium that began with an executive order in March 2020. The California Apartment Association, along with other landlord groups, say the restrictions have left property owners stuck with tenants unable or unwilling to pay rent, while they still pay mortgage, insurance and maintenance expenses.

Newsom said Wednesday it’s unlikely the state will push the moratorium past Sept. 30.

Derek Barnes, CEO of the East Bay Rental Housing Association, said administrators have listened to suggestions from local landlords and changed the program. A few property owners in Alameda and Contra Costa counties have started to receive checks.

But the process is still too slow.  “We know it’s not happening in 30-days or less,” Barnes said. “At the end of the day, it’s about getting relief into the hands of people that need it.”

Mirna Burgos of San Jose fell behind on rent when families sharing her four-bedroom apartment lost jobs and had to move. Burgos, 62, and her husband, Sigfredo, applied for state aid with help from Catholic Charities of Santa Clara County.

Her landlord has been sympathetic, she said, but he still filed eviction papers with the court while Burgos waited to hear on her aid request. “It’s very, very slow,” she said through an interpreter. “It’s really hard.”