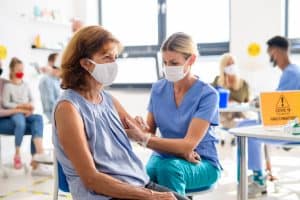 A landlord in southeastern Florida is requiring that his tenants get vaccinated for COVID-19, a move Governor Ron DeSantis’ office said could defy the state’s vaccine mandate ban.

Santiago A. Alvarez and his family own eight apartment complexes, which contain a total of around 1,200 housing units in Broward and Miami-Dade counties. The Sun-Sentinel reported on Sunday that Alvarez enacted a policy on August 15 that will automatically deny applications from potential new tenants if they’re not vaccinated. Additionally, if anyone is unvaccinated when their lease comes up for renewal, they will have to move out.

The rule not only applies to tenants in Alvarez’s apartments, but it also extends to employees in the complexes, who similarly must show proof that they’ve received at least one dose of a COVID vaccine.

The Sun-Sentinel reported that Alvarez’s policy makes him the “first large-scale landlord known to national housing experts to impose a vaccine requirement not only for employees, but also for tenants.”

Alvarez told the newspaper that his main objective is keeping people healthy. He said around a dozen of his tenants have died of COVID-19 and many others were sick. Reaction from people living in his apartments has been divided in regards to the new policy, and at least two tenants indicated they contacted local eviction defense attorneys about challenging the rule in court.

Another challenge may come from DeSantis, whose vaccine passport ban prohibits businesses from requiring customers to be vaccinated. The Republican governor has repeatedly said that requiring proof of vaccinations violates civil liberties and violates the rights of people to keep medical information private.

When contacted by the Sun-Sentinel, DeSantis’ press secretary, Christina Pushaw said she conferred with the governor’s legal counsel. She said the counsel thought Alvarez’s policy may run afoul of the DeSantis-backed ban on businesses requiring vaccine documentation.

“Our counsel thinks that would be a violation of the vaccine passport ban,” Pushaw told the paper in an email.

Each violation of that ban—which became state law after DeSantis issued it as an executive order in March—could result in a $5,000 fine for each violation. The Florida Department of Health stated last week it would start enforcing the vaccine passport ban on September 16.

The Sun-Sentinel wrote that Alvarez’s attorney recently replied to one tenant’s attorney by saying that the vaccine policy does not violate DeSantis’ executive order banning vaccine passports. The lawyer argued the ban applies to businesses wanting vaccine documentation from “patrons or customers.”