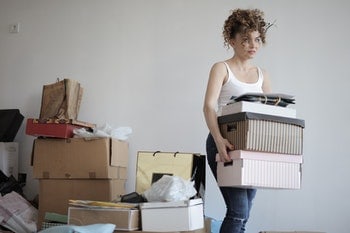 Asiaha Butler is on the front lines as her community battles gun violence, food deserts and a battered public image as president of a civic group in one of Chicago’s poorest neighborhoods.

Like many cash-strapped neighborhoods across the country, Englewood, on the city’s South Side, is preparing for what experts say could be a deluge of evictions by the end of July, when the federal eviction moratorium is expected to end.

“If you’re savvy enough to be online or savvy enough to check for it, you might get that assistance,” said Butler, whose group, R.A.G.E., short for Resident Association of Greater Englewood, works in a neighborhood with a poverty rate of over 40 percent. “But the average person is still trying to eat, you know. They’re still trying to feed their families.”

Beyond the everyday poverty fight, and looming eviction crisis, is a complex problem of government money aimed at preventing evictions from getting into the hands of people who most need it. The digital divide, a thicket of paperwork required to qualify for aid and a hodgepodge of state programs have translated into too little money in too few pockets of people facing eviction, experts told NBC News.

“They’re trying to figure out ways to get assistance and just sometimes just don’t have access online to look for it,” she said.

New York, California, Oregon and Washington state have implemented a host of rental assistance programs and extended their moratoriums two months past the Centers for Disease Control and Prevention’s July 31 cutoff over the past month. In addition, New York, California, Washington and more than a dozen cities, such as Cleveland, have implemented right-to-counsel programs, which ensure tenants have legal representation when faced with an eviction.

But states like Mississippi and Wyoming, for instance, have spent a small amount — 1 to 3 percent — of their rent assistance dollars from the federal government, experts said. Both states, and more than two dozen others, have no statewide eviction moratoriums in place.

Data suggests that, nationwide, renter debt is trending downward as the economy rebounds, but there are still millions with rent arrears. Nearly 6 million households are behind on rent, which amounts to roughly $20 million in rent debt, according to an analysis by National Equity Atlas, a group that studies social equity among states and metropolitan areas, of data from the U.S. Census Bureau Household Pulse Survey.

That’s down from roughly 17 million households last year around this time. However, the majority of those still affected are people of color, at 66 percent, and low-income households, at 81 percent, which are those who make less than $50,000 a year, according to the data.

The national moratorium, which was implemented to encourage self-isolation to combat the coronavirus, has been extended four times and repeatedly challenged in several courts by groups representing landlords. Recently, the Supreme Court declined to lift a ban on evictions after the moratorium was challenged by the Alabama Association of Realtors.

Experts and advocates said many localities are bracing for what could be an avalanche of eviction cases, with some states and cities extending their moratoriums or expanding access to rental assistance programs, while other areas struggle to dole out aid because of bureaucratic hurdles and some landlords refusing to participate.

But groups representing landlords told NBC News the moratorium has been a nail in the coffin for many mom-and-pop apartment owners, which are the majority of landlords, but the industry is not bracing for an increase in eviction filings.

“Will it be the tsunami they’re talking about? I’m not convinced it is,” said Bob Pinnegar, CEO of the National Apartment Association, which represents around 81,000 property owners, developers and other professionals in the apartment industry. “If the systems are in place and the dollars are flowing and the property owners have a reasonable expectation that they’re going to get their rent, then you’re not going to see evictions.”

He said, for example, evictions in most places take up to three months to process through the courts, depending on whether there are case backlogs, and multiple evictions may place the landlord in a tighter crunch to repair, market and rent out the unit.

However, many jurisdictions have been reporting trouble spending the rental assistance aid, which was passed by Congress through several Covid-19 relief bills and totals roughly $46 billion.

“There’s really a wide variety of places where I expect renters to continue to struggle and continue to be at risk of eviction,” said Diane Yentel, president of the National Low Income Housing Coalition. “There has also been a patchwork of protections that governors and mayors in some communities are putting in place, looking ahead to protecting tenants when the federal eviction moratorium expires.”

Groups representing landlords continue to argue the moratorium has created confusion and encouraged tenants to not pay rent. But tenant groups have raised concerns about the burdensome process in some areas to receive rent assistance funds.

Yentel said her group has been tracking how the programs have been rolled out and, in large part, it’s been a mixed bag across the country.

An analysis by the National Low Income Housing Coalition found that the locally administered programs differ on the documentation they require. That can prolong the review and disadvantage tenants who lack formal paperwork explaining the reason for unpaid rent, such as a letter confirming a layoff. In addition, the digital divide has created a larger rift of getting basic access to online portals and printing reams of paperwork to apply to some programs.

“The good news is that there are sufficient resources to assist those tenants in paying the arrears that they owe and, in some cases, even helping them with future rent payments,” Yentel said. “The problem is that the money is not reaching those tenants in time.”

The vast majority of the nearly $50 billion Congress allocated for rental assistance has not been spent, and in some areas, such as Mississippi, there are glaring racial disparities in who is receiving help because of a lack of awareness about the programs and bureaucratic obstacles, advocates said.

To be eligible for federal emergency rental assistance, tenants must make no more than 80 percent of the area’s median household income. Applicants also have to show that they faced hardship either directly or indirectly because of Covid-19.

Yentel said the trends aren’t precisely blue states vs. red states because some large states, such as Texas and California, for instance, struggled to give out rental assistance aid.

In March, a report from the Texas House Committee on Urban Affairs showed the state only gave out a tiny fraction of more than $1 billion in aid. Currently, Yentel said, Texas has been one of the states that have been the best at spending the rental assistance money — spending about 50 percent of its emergency rental assistance funds so far.

“The trends are, the programs that do a few basic things are the ones that are the most successful in spending their money and reaching the tenants who need it the most,” she said. “You know, in contrast, of course, the programs that have highly complicated, long applications with burdensome documentation requirements, they are slowing down the process for everyone and often weeding out some of the most marginalized people, who need that assistance the most but can’t produce the documentation that’s required.”

On Chicago’s South Side, one of the initiatives Butler’s community group is rolling out includes partnering with other community organizations to host a weekly resource and market hot-spot hub to help people apply to programs and understand what resources are available to them.

“The unity between the groups is what makes it stronger,” Butler said. “If it’s not a local community group promoting it that people know, they’re not going to know that these opportunities were there.”