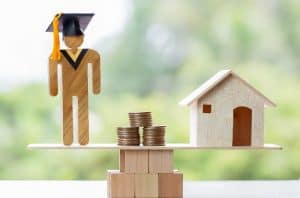 Conditions in the student housing sector are predicted to look better than they did at the height of the COVID-19 pandemic, with vacancies forecast to improve slightly over 2020 levels. But asking rents will likely take the heat this fall, with an expected decline from -2.7% for properties by bed to -1.8% for properties by unit, according to a new analysis from Moody’s Analytics REIS. That decline is rent marks the first such decrease in the sector since 2014.

While the COVID-19 numbers are improving nationally, the debate over whether to require student vaccinations is weighing on the sector. Moody’s analyst Ricardo Rosas cites recent US News data that shows roughly 680 college and universities have vaccine mandates thus far, and of the 200 colleges Moody’s tracks, 37% are requiring vaccinations.

“The recent increase in COVID cases is already causing some universities to reconsider their in-person strategy for the coming school year,” Rosas says in his analysis of the sector. “These factors are creating uncertainty for the student housing sector by putting into question the number of students, their potential tenant base, that are going to be in and around campus.”

Rent declines will happen across all regions, though the Southwest is expected to again lead with a decline of 4.2% for properties by bed. The largest decline for properties by unit is predicted for the Northeast, at 4.5%.

“Though we appear to be on the tail end of the recovery from COVID-19 there are still variables which could cause uncertainty for the student housing sector,” Rosas says. “In the short term, decisions of vaccine requirements along with concerns over the delta variant are already impacting the in-person strategies for several universities. While in the long run, a discussion would need to be had regarding the widespread adoption of hybrid classes. All of which would affect the number of students on campus and thus the potential tenant base for the student housing market.”