Why Empty Offices Are Becoming Apartments in Texas’s Big Cities

With workers continuing to stay home post-pandemic and housing in short supply, developers in the state’s largest metros are giving a second life to old buildings.

One morning last week, two hundred laborers in hard hats and safety vests swarmed into the iconic, I. M. Pei–designed Energy Plaza skyscraper in downtown Dallas, continuing their summer’s work of gutting the building’s insides. The 49-story office tower, once the headquarters of energy giant Arco’s oil and gas division and, later, electricity provider TXU, is being transformed into a half million square feet of updated offices and 293 luxury apartments. 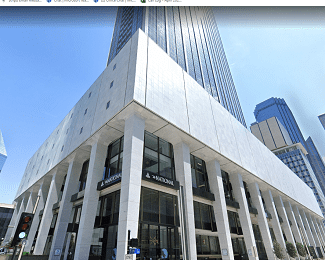 The developer behind the redo, Dallas-based Todd Interests, has completed several similar conversions in the city since 2007. One of those, whose first phase opened in 2020, used tax credits available to historic properties, along with local tax-increment financing, to help turn the 51-story First National Bank Tower into a mixed-use property featuring several restaurants, a hotel, offices, and 324 upscale apartments.

Philip Todd, a partner at Todd Interests, says that while that tower, rebranded the National, is a “big, bustling” development with a lot of activity, Energy Plaza—located a stone’s throw away—will have more of a high-end boutique feel—sleek and “refined,” like “a true New York high-rise.”

Redevelopments such as Todd’s are happening more and more in the downtowns of Texas’s fast-growing big cities, often with space in struggling, obsolete commercial towers getting new life as rental housing. The number of “adaptive reuse” projects has soared nationally since the onset of the COVID-19 pandemic, which emptied out offices and kick-started a work-from-anywhere movement. Last year, more than 20,000 U.S. apartment-conversion projects were completed, nearly double the number of conversions in 2020 and 2019 combined, according to RentCafe, which tracks the apartment market.

The trend seems tailor-made for Texas. Office-vacancy rates in most of the state’s major downtowns are high (roughly 25 percent in Dallas and Houston, in the teens in Fort Worth and San Antonio). The cost of single-family homes has skyrocketed and interest rates have risen, making many would-be buyers renters. And relatively few apartments are available, with vacancy levels in the single digits and pricey monthly rents expected to get even pricier, according to projections from the Texas Real Estate Research Center at Texas A&M University.

What’s more, decades-old buildings may be more cost-effective and environmentally friendly to revamp into residences than ground-up construction, experts say, since the building’s shell is already in place and carbon emissions from the creation of new materials can be reduced.

“I think it checks all the boxes,” Chuck Dannis, an adjunct professor of practice in real estate at Southern Methodist University, says of the office-to-apartment trend. “You get empty space filled, and you get some people back into the inner city and you increase the tax rolls. I think all of that is good.”

Consider the situation in San Antonio. A development group including billionaire businessman Red McCombs and real estate investors Ed Cross and Jon Wiegand plans to convert offices at the 93-year-old Tower Life Building into 234 rental apartments and ground-floor retail space. The 31-story tower, currently about 40 percent leased to office tenants, stands near the River Walk and an expanding campus of the University of Texas at San Antonio.

While the Alamo City’s downtown office market is faring better in terms of vacancy than those in Dallas and Houston, Wiegand says the Tower Life Building has struggled with occupancy for years. “With any development project, you have to understand what the market is interested in,” he says. “Our focus has been on delivering a product where there’s a strong market today, and that certainly is the residential for-rent market in downtown San Antonio.”

The Tower Life developers—who foresee renting the apartments to tenants with a range of incomes and have designated some units for households earning less than the area’s median income—are negotiating with Bexar County officials for tax incentives.

They aren’t alone in jumping on the office-to-residential trend in the city. Similar projects reportedly either under consideration or underway include a plan by San Antonio–based Weston Urban to turn offices into residential space in the Municipal Plaza Building and the conversion of office space in the historic, ten-story Travis Building into 63 luxury multifamily units by Harris Bay, a California-based developer. The Travis redo will take advantage of the Texas Property Assessed Clean Energy program, a long-term financing tool that helps commercial, industrial, and multifamily building owners lower their operating costs in exchange for making improvements to reduce water or energy consumption.

Another 1920s-era landmark akin to the Tower Life Building will soon be getting a similar makeover in downtown Houston. The top ten floors of the  32-story Niels Esperson Building, recognizable for its ornate Italian Renaissance style, will gradually be converted to upscale residential space beginning this fall, says Dougal Cameron, president of Cameron Management, which owns the Esperson office complex.

The Niels Esperson, once the tallest building west of the Mississippi River, will offer units comparable in quality and amenities to those at the nearby Brava, a new luxury residential high-rise developed by Hines—but “hopefully we’ll be a little cheaper, just because our basis is a lot less,” Cameron says. The Brava website says monthly rents there start at $2,613 for a one-bedroom apartment, $4,171 for two bedrooms, and $10,309 for a unit with three bedrooms. (The median rent for a one-bedroom apartment in Houston is $1,084, according to rental marketplace Apartment List.)

Only 58 percent of offices at the Esperson are now leased, Cameron says, while the demand for residential space in Houston seems robust. “It’s very clear that, worldwide, we’re maybe twenty percent or thirty percent overbuilt in office buildings, just because of work-from-home and COVID,” he says. “What we’re trying to do is be very responsive to whatever the market says it wants. If the market says, ‘More residential, please,’ then as tenants’ leases expire, we can keep going residentially from the top down.”

The office market in downtown Fort Worth is healthier than Houston’s, but Cowtown leaders say they too have seen more interest in office-to-apartment conversions recently. That’s positive, they stress, because the high demand for residential housing in Fort Worth appears to have “very long legs,” and because a vital downtown needs full-time residents who look to their neighborhood to eat, shop, and be entertained.

“Just yesterday, we met with a developer interested in the conversion of a Class C office building into about 260 residential units,” said Andy Taft, president of Downtown Fort Worth, referring to the least desirable type of office space. “There’s a second significant office building that’s currently being evaluated for apartments as well. That would be on the order of three hundred units.”

The city of Austin, meanwhile, has been bucking the adaptive reuse trend. Dewitt Peart, president and CEO of the Downtown Austin Alliance, said that in contrast to the conversions occurring elsewhere, “Austin’s downtown office market has had an entirely different narrative as the demand for office space remains high, especially when compared to other cities around the country.”

Indeed, Austin continued to lead Kastle Systems’ weekly, ten-city Back to Work Barometer with 60.4 percent of office space in use as of late August, according to Kastle, which tracks building-access data for offices in major U.S. metro areas. Among new downtown leases that the state capital has recently inked are ones with Facebook’s parent company, Meta (589,000 square feet); TikTok (126,000 square feet); and Cirrus Logic (120,000 square feet). “To accommodate for this demand, downtown Austin has five-point-five million square feet of office space under construction—the only large Texas downtown with anything close to that amount,” Peart said. “We do not anticipate this increased demand, a demand that has gained momentum even despite the pandemic, to slow or falter anytime soon.”

Back in downtown Dallas, plans for at least four big office-to-residential conversions are in the works. In addition to Todd Interests’ project at Energy Plaza, they include the fifty-story Santander Tower (formerly Thanksgiving Tower), where Dallas-based Woods Capital will transform multiple floors into 228 apartments, according to a release from Adolfson & Peterson Construction, the general contractor on the job.

“By converting vacant office space into luxury, multifamily housing, we can create a more vibrant, mixed-use neighborhood and meet the growing demand caused by migration to the area,” said Jonas Woods, CEO of Woods Capital, in the release.

Woods Capital also is reportedly turning the top half of the 40-story Bryan Tower into apartments, while San Antonio–based GrayStreet Partners is plotting new rental units at the 56-story Renaissance Tower.

At Energy Plaza, the construction workers are about 60 percent finished with demolition of the interior. Philip Todd says that, unlike the National redevelopment, Energy Plaza—it will get a new name at some point—is being redone without tax incentives, which can come with burdensome requirements on developers. Energy Plaza, opened in 1983, also is about two decades newer than the First National building, which was riddled with asbestos and had other unique needs, he says.

With Energy Plaza on track for completion by late 2023 or early 2024, is Todd worried that not enough people will have returned to work in downtown offices by then to rent his apartments? “No,” he says quickly, pointing to figures showing that downtown Dallas has 14,000 residents, up from 11,000 in 2016. “I’d be surprised what percentage of residents downtown actually work downtown. I think a lot of them are commuting out to other parts of the city. I think apartments are going to continue to be successful in Dallas.”