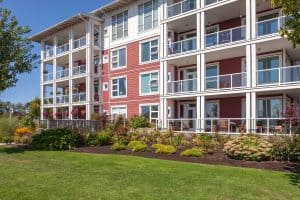 In the late 1990s, the First Methodist Church of Los Angeles decided to repurpose its large property on Flower Street near Staples Center. It brought in downtown-based 1010 Development Corp. to build two affordable housing properties on the site: Hope Village for low-income families and Villa Flores for low-income residents age 62 and older.

Reflecting on the projects, Robert Buente, 1010 Development’s president and chief executive, called them “a great success,” adding that each was “rented within hours.”

“We got interested in the market because people are growing older,” Buente said. “It’s a growth area.”

The company has gone on to develop other affordable housing projects, including Casa Carmen in Pico-Union, which is also for seniors. Most of the funding for Villa Flores came from a Housing and Urban Development Department program, and the funds to build Casa Carmen came from several sources, including the city, state and tax credits.

The demand for senior housing hasn’t let up in the decades since the church and developer teamed up. But financing has become more challenging, and that issue has only exacerbated the gap between the number of units available and the number needed.

Buente said chasing down money has become such a roadblock that his firm is no longer looking to build projects reserved entirely for seniors.
“We can’t do those anymore. … Most of the money is now going toward permanent supportive housing and homelessness,” he said.

Instead, 1010 Development is looking at placing some senior units in affordable projects. That means developers like 1010 Development are chipping away at the problem rather than meeting it wholesale.

‘Overwhelming’ demand
Nationwide, the number of people 85 years and older is expected to grow 177% by 2050, according to CBRE Group Inc. Meanwhile, only 8.2% of people over age 75 are in senior housing in Los Angeles and Orange counties, compared to 11.5% nationally, said Bryan Lewitt, a managing director at Jones Lang LaSalle Inc., which “suggests that supply in the area is low.”

Lewitt said an additional 2,400 senior housing units are under construction in L.A. and Orange counties. Those units are expected to be delivered next year, and a small portion of them will be affordable with the rest at market rate.

“The demand is completely overwhelming right now,” Pynes said.
The problem is not as dire for seniors who can afford the average cost of a senior unit.

“We have a really robust housing market here,” Lewitt said. “Seniors can afford to move into these facilities, which are expensive,” when they sell their current homes.

Lewitt said rents for senior housing average $5,213 in Los Angeles and Orange counties, and there aren’t a ton of income-restricted affordable units.

But in L.A. County, higher earners are disproportionately spending less on housing. According to the nonprofit California Housing Partnership, three out of every four older adult renter households that earn less than 15% of the area median income spend more than half their income on housing. For higher earners, the share is less than 3%.

“Just like you have an affordability crisis in multifamily, you’re facing an availability crisis in senior housing,” said Steve Ervin, head of the Seniors Housing and Healthcare arm at Berkadia Proprietary Holding.

Financing factors
Berkadia recently grew with the addition of Simona Wilson in L.A., who was hired in the position of director to expand Berkadia’s senior housing division on the West Coast.

“Senior housing is a strong market to be in. … We believe that our senior housing team has the opportunity to grow and have more of an impact on the market,” Ervin said.

Ervin, who has been involved in the financing of senior housing for roughly 35 years, said there are “multiple levels of complexity” when it comes to financing.

Part of that complexity comes from how rents and on-site services are financed, and part comes from how the properties are evaluated to assess their price and property value.

It can be difficult to set rental rates in advance because Section 8 vouchers, which are commonly used in the affordable housing sector, don’t work “quite as well” with senior housing communities, which tend to be loaded with on-site staff as well as services and amenities.

“There is that care component that comes with it. The rules are a little bit fuzzy in that regard,” Ervin said.

As far as underwriting goes, Ervin said there aren’t the same underwriting and programmatic standards as in other multifamily housing to assist affordability.

HUD and other organizations, he said, are looking to be big players in financing senior housing going forward.

For decades, HUD was heavily involved in the direct financing of affordable housing production for older adults in L.A. County, but funding sources have shifted, and that has led to a decline in the creation and preservation of affordable housing, according to California Housing Partnership.

In 2020, the nonprofit estimated that more than 4,800 of L.A. County’s 43,000 subsidized affordable homes for older adults are at risk of converting to market rate over the next 10 years.

Under construction
Anand Kannan, president of Irvine-based Community Preservation Partners, which has a large presence in L.A., said his company is focused on preserving existing affordable communities.

Kannan said there are a lot of aging properties for seniors in desperate need of upgrades.

“Our directive and our mission is looking at older properties, and there were a lot that were built in the ’50s, ’60s and ’70s that were senior buildings and programs with HUD, and those buildings are over 50 years old,” Kannan said.

The company looks for properties where it can update units and improve services offered — and preserve and extend the affordability covenants tied to financing terms that keep rents low.

Its recent projects include the $15 million acquisition and remodel of Kernwood Terrace Apartments, a 51-unit complex for seniors in in East L.A.
Last year, in partnership with Jonathan Rose Cos., it acquired Golden West Tower Apartments, a 180-unit senior housing community in Torrance. The buyers have spent more than $10 million to improve the property.

In L.A., it has five projects with supportive units for seniors: One is 100% set aside for seniors, and the others have senior units as a percent of the units.

Joel Roberts, Path’s chief executive, said the location and funding dictated how many of the units were for seniors.

“It’s not a simple process,” he said. “You have to have the neighborhood accept that they are willing to have a building of people that were formerly homeless in their neighborhood and then get funding.”

Many of Path’s projects in the works now — seven that are under construction and nine in the planning stage — will have senior units.
He cautioned that a growing percentage of the homeless population were seniors, up 20% in 2020.

“It’s a very sharp increase, and that was before Covid, so we’re very, very worried that with the pandemic that number is going to go up even more,” Roberts said.

“We definitely see that there will be an increase in seniors experiencing homelessness in the next couple of years, and we think it’s vital for them to be prioritized in affordable and supportive housing.”