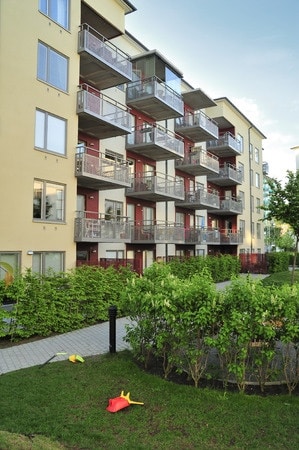 Prior to January, few knew anything of the novel coronavirus from Wuhan, China. But more than 10 years after weathering the 2008 downturn, the moment seemed right, said Michaels, a managing director at Stockdale.

The new fund went on to close $550 million in commitments from investors, including sovereign wealth funds and public pension plans, in the second week of February. It’s now targeting an 18 percent to 20 percent return on investments in troubled assets, including multifamily properties in several key markets around the country, according to Michaels.

Older rental properties with lower-income tenants are “absolutely going to get hit,” he noted. “And now we’re in a position to play offense.”

While the hospitality and retail sectors have already cratered, after tourism ground to a halt and many stores and restaurants shut their doors amid widespread stay-at-home orders, apartment building owners are beginning to feel the pressure as well.

Data from the FDIC shows there was $4.58 billion in outstanding multifamily loans held by institutions insured by the agency at the end of 2019.

And as U.S. unemployment accelerates — with jobless claims hitting 26 million since the pandemic hit — renters increasingly lack the resources to withstand major income losses, according to Harvard University’s Joint Center for Housing Studies. The report found that the median low-income renter has only $410 left after paying housing costs.

Despite the dismal forecast, a national survey of 11.5 million rental properties showed that 84 percent collected at least some rent in April. But many landlords expect that number to be significantly lower in May, and those with less affluent tenants say they have already taken a hit.

At the same time, the national data does reflect how rent collection can vary widely based on how organized the tenants are and what industries they work in, among other factors. And that’s before assessing each building’s financial underwriting.

“Everyone’s real estate is different,” Pistilli said. “It depends on where you are, what tenants you have, and what you’re running. For mom-and-pop operations, or buildings where they’re over-leveraged, May is going to be tougher.”

“There are a lot of groups that have what they consider to be ‘rescue capital,’ and can come in with a lot of equity and play different parts of the capital stack.”

There is no shortage of money chasing the first signs of distress throughout the country’s multifamily markets, according to those in the business.

In mid-April, Ladder Capital sold a portfolio of loans backing multifamily properties in New York City, New Jersey and Los Angeles to real estate investment firm Madison Realty Capital for as much as $200 million, in an attempt to stay in the black, The Real Deal first reported. The loans included both performing and non-performing debt.

Increasingly, as the market turns, opportunistic investors are lining up “with the stands full, saying, ‘I have cash ready to go,’” said Peter Von der Ahe, who leads the New York multifamily team at the commercial brokerage Marcus & Millichap. “The problem is, do they agree on pricing?”

A “steady stream” of such predatory investors have been calling Ariel Property Advisors’ Midtown office, said its executive vice president Victor Sozio. And as the financial impacts of the coronavirus grow more acute, those investors will likely have more opportunities.

“There are a lot of groups that have what they consider to be ‘rescue capital,’ and can come in with a lot of equity and play different parts of the capital stack,” Sozio noted.

New York’s Signature Bank, which holds nearly $15 billion in multifamily loans, reported in its first quarter earnings call that rents collected from stabilized apartments were down 50 percent in April. Market-rate apartments fared better, with collection at closer to 80 percent, according to the bank. Signature’s president, Joseph DePaolo, noted that well-capitalized borrowers are “waiting on the sidelines” to scoop up distressed multifamily assets on the cheap.

The impacts on multifamily owners, specifically in New York, is partly due to last year’s rent law overhaul, which favors long-term owners over those who were looking to quickly deregulate and flip properties prior to June 2019. That means that many business plans were disrupted, leaving some investors vulnerable to reductions in rental income, depending on the terms of their debt.

“I have learned very quickly two words in the English language that have the opposite meaning: forbearance and forgiveness.”

“In 2008 to 2010, rent-stabilized multifamily housing did well and market-rate housing was more impacted, but now it’s the reverse,” said Sozio, noting that he expects more senior lenders to say, “we’re pretty high on leverage, let’s package a few of these notes, sell them [and] take 90 to 100 cents on the dollar.”

Multifamily landlords whose mortgages are federally insured can apply for forbearance, which more than 640 borrowers have already done on nearly $5 billion in unpaid debt, according to a recent report from Fitch Ratings.

Jerry Waxenberg, a multifamily landlord whose family firm owns 2,000 rent-stabilized units in the Bronx, Upper Manhattan and Brooklyn, said his collections in April were about 60 percent their normal level. If not for his Section 8 units, which are federally subsidized, and apartments rented by the city’s Department of Social Services for us as homeless shelters, the landlord estimated that his collections would have been 40 percent.

Waxenberg told TRD that his lender, JPMorgan Chase, and Freddie Mac were initially receptive — and even proactive — about entering into a forbearance agreement. But they have since gone quiet, leaving the financial future of his portfolio, which his family has managed for decades, uncertain.

“I have learned very quickly two words in the English language that have the opposite meaning: forbearance and forgiveness,” said Waxenberg. “I can’t forgive my rents this month, because no one is forgiving my mortgage payments.”

While investors often flock to multifamily properties — given their relative resilience to downturns — no asset class can survive a prolonged economic shutdown unscathed.

When the dust settles after the pandemic, some cities may also rethink their approach to density, economist and NYU Schack Institute of Real Estate dean Sam Chandan said during a recent TRD Talks Live webinar.

Robert Morgenstern, of the real estate investment firm Morgenstern Capital, said “there’s no question that multifamily, in the short and medium term, is going to be a safer bet than retail or hospitality.”

But as the country slips deeper into a recession, “even household names are facing distress and will be forced to sell,” he added. “There will be some shakeup — those conversations are absolutely starting.”

On its first quarter earnings call, Buffalo-based M&T Bank, which has a $36 billion commercial real estate portfolio with $4.2 billion in multifamily loans, reported that the volume of its delinquent loans doubled in the first quarter.

Darren King, M&T’s executive vice president, said the bank’s multifamily clients will be attracted to opportunistic buys as prices move downward. “They see opportunity as much as they see risk,” he said. “They are buyers as much as sellers.”

Chandan, for one, sounded a positive note for the multifamily sector, which he said has stayed relatively stable and is still enjoying “positive market sentiment” overall.

That could give investors a greater appetite for rental properties, especially those with a longer-term strategy, including public pension systems, according to Charles Bendit, co-CEO of the real estate development firm Taconic Development Partners.

But that all depends on the size of the fund and its appetite for risk.

“We all intuitively know there are going to be opportunities,” said Bendit. “If values go down, and you believe the market will come back after the event, and even exceed those levels, then it’s a good time to be a buyer. But where that will surface, who knows?”