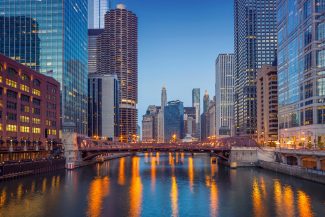 Last week, REjournals hosted its 12th Annual Chicagoland Multifamily & Apartment Summit online. The discussion was broken up into two parts, with the first featuring a group of real estate investors and lenders.

Of the many topics discussed, one of the big themes was how Chicago property owners and their renters have fared this last year of uncertainty and financial hardship. And while times have been tough, the consensus was that we’re already witnessing the rebound.

Last spring was marked by mass vacancies as Chicago renters struggled with job losses, disruptions to education, and a desire to have more space or be closer to family. However, the spread of this trend was not equal across the city.

“At the beginning of COVID, there was basically a mass exodus out of a lot of lot of pockets of the city, ” Horizon Realty Group’s Jeff Michael said of last spring. “The areas that got hit the most were places like the Loop, South Loop and West Loop, but as you move north in the city geographically, the impact seen was less and less.”

Michael, whose company’s portfolio spans from the South Loop through much of the northern lakefront communities, added that areas like Rogers Park weren’t nearly as affected by the pandemic. However, one of the company’s buildings in the South Loop at one point saw an occupancy dip as low as 70%.

However, the recovery is well underway, but it’s going to take more time to get back to pre-pandemic level occupancy in some areas.

“Statistically, we’re looking good compared to this exact same time frame last year,” Michael said during the panel discussion. “Applications up 7.5%, leads generated are up 19%, CRM activity is up 25%, but overall percent leased is still down by 7.5% compared to this period last year, so we still have a huge hole to climb out of.”

Ken Motew of Mo2 Properties said that his company has witnessed many of the same issues, though this year has already been much busier than normal as folks return back to the city and economy begins to recover.

“We’ve had almost zero percent vacancy for over 30 years, but when COVID hit, we went from not having anything vacant to probably 10% of our portfolio being vacant, which we’ve never had,” Motew said. “From the beginning of the year, we’ve rented 76 apartments over 700 units, but we’re down 12.5% in our rents.”

While hit hard, Motew says that his company worked with both existing and new tenants by offering concessions like one or two months of free rent or reducing move-in fees to ensure that renters would remain in place during the pandemic. And while total income is down, occupancy is back up to nearly 100%.

But there’s more merit to comping one or two months of rent for new leases, both Michael and Motew explained. The trade-off is that landlords are seeking longer term leases, going from a traditional 12-month lease up to 14- or even 18-month lease terms.

However, it’s not just the neighborhood property owners and managers who are offering concessions to lure new renters into leases. Downtown high-rises have seen some of the biggest drops in rent prices since the start of the pandemic, and many are offering the same one to two months of free rent deals to new tenants.

“High-rises were never our competition, but that’s become our competition for the next year, because people who would never normally look at a high-rise are now looking at them because rents are [significantly lower],” Motew said of the recent trend.

However, panel members suggested that as we the city moves into the spring and summer rental markets, many of the big concessions offered by both neighborhood and downtown landlords are likely to be taken off the table.

So, how are the Chicago suburbs handling the financial ebbs and flows of the pandemic?

Craig Pride of KTGY Architecture + Planning said that he’s been seeing a change in trends and tactics to new development in some suburban markets.

“We’re seeing a strong increase in the build-for-rent market,” Pride said of the newer of housing development model where single-family home or cottage communities are designed as rental. “It’s speaking to the fact that people still want to rent but they want a connection to the outdoors.”

Pride says that the pandemic has reinforced the desire and demand to have more outdoor space than something as small as a balcony. But there’s also an opportunity to break into a whole new market segment.

“The build-for-sale clients are moving into [build-for-rent] for the increased revenue and to put a different product out there,” Pride adds. “It’s been prevalent in the warm weather states, but it’s becoming a more viable option for developers in the Midwest.”