Home·Property Management·The Fight Against Evictions Moves to the Courts

The Fight Against Evictions Moves to the Courts 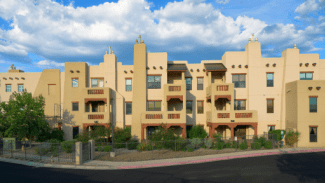 With rents at all-time highs and few pandemic protections in place, US housing officials are looking to judges to slow the rise in evictions.

The US affordable housing crisis has not spared the Land of Enchantment.

Rents are skyrocketing in Albuquerque, New Mexico’s largest city, rising nearly 40% since March 2020, according to Apartment List. In nearby Santa Fe, the average two-bedroom apartment goes for $1,400, comparable to rents in larger and more exclusive metros. New Mexico’s eviction moratorium expired in April, allowing landlords to force out tenants who can’t keep up with rising costs.

But renters struggling in Albuquerque and other places across the state have a powerful new ally against evictions: the courts.

The state supreme court in New Mexico — not a mayor or state senator or governor, but the judiciary — is working to curb evictions across the state. Since the start of the pandemic, the court has moved to protect vulnerable tenants, and more recently, to ensure that displacement doesn’t return to high levels seen across the state before pandemic rent protections arrived. To keep landlords from flooding courthouses once the ban was lifted, in February the New Mexico State Supreme Court launched an eviction diversion program, an effort to bring landlords and tenants together to resolve their disputes and to connect renters with resources to bring their accounts up to good standing.

The Biden administration highlighted the New Mexico initiative during an August summit on evictions, an event focused specifically on judiciary actions to try to prevent evictions at the court level. With pandemic moratorium orders all but gone, and much of the federal emergency assistance funds already spent, housing officials are pivoting to the courts in hopes of heading off evictions at the pass.

Evictions are down from before the pandemic

This approach appears to be gaining momentum: State supreme courts in Indiana, Texas and Michigan have taken the same route as New Mexico, with Michigan cutting its eviction rate in half between 2019 and 2022. A groundbreaking eviction diversion program in Philadelphia has led to settlement or resolution in 85% of the cases that have come up for mediation, reducing total evictions by more than two-thirds. So far, 180 jurisdictions across 36 states have adopted some form of eviction diversion since President Joe Biden took office, the White House says.

“Many of these courts initially acted in response to the pandemic,” said Vanita Gupta, the associate attorney general for the US, during the White House summit. “But now courts around the country are considering how they can take what they’ve learned about eviction diversion and actually make permanent and lasting transformative change in the way state and local courts handle eviction.”

In New Mexico, the structure of government guided the form of the solution. New Mexico has a part-time legislature; the state ranks among the lowest in the country in terms of legislative staffing and compensation. According to Bacon, who was named the state’s chief justice in April, once it became apparent that the pandemic would “wreak havoc on housing stability,” the court stepped up. With no special legislative session to deal with the looming housing crisis, the state supreme court ordered a stay on eviction proceedings for nonpayment in March 2020.

Evictions have stayed low in Albuquerque while rising in other cities

Bacon notes that the court’s powers to intervene on housing issues are limited and narrowly prescribed. There’s a strict schedule for courts to handle eviction complaints, for example. But the court has broad authority to convene a body to study or address an issue. So the New Mexico State Supreme Court put together a task force, drawing members from courts and state agencies as well as property owners, housing advocates, legal service providers and local officials. The court launched a diversion pilot in February and expanded it two months later. The goal was to speed up the delivery of funds from the emergency rental assistance program, which was stood up by Congress to help cash-strapped renters recovering from pandemic layoffs.

The resulting diversion program employs so-called navigators to help landlords and tenants apply for available funds at the very onset of an eviction filing, or address conflicts through mediation if needed. The state supreme court extended its eviction moratorium to April, giving time for both the emergency assistance and eviction diversion programs to get up and running. So far, New Mexico has delivered some $148 million in federal relief for overdue rent and other housing costs, reaching more than 44,000 households. And while evictions in Albuquerque are up, they have yet to return to the high-water mark. Although the court doesn’t have the power to make the diversion program mandatory — landlords in New Mexico can take it or leave it — a subgroup of the task force is working on legislative reform to require participation.

That would move Albuquerque closer to Philadelphia, which passed the nation’s first mandatory, pre-filing eviction prevention program. This approach requires landlords and tenants to apply for aid and seek housing counseling before an eviction can be filed. As a result of this and other tenants’-rights programs, evictions in Philadelphia fell from more than 20,000 before the pandemic to about 6,800 in 2021. Last year, the city passed a law guaranteeing tenants a right to counsel in court. “We’re not slowing down,” says Philadelphia City Council member Helen Gym, who championed the program.

While Philadelphia may be the gold standard for tenant advocates, many jurisdictions have yet to take even a first step. Back in December, the nonprofit National Center for State Courts established a four-year grant program to help courts study, implement or staff up diversion programs. This $11.4 million eviction diversion initiative launched in June with an initial cohort of a dozen state and local courts from eight states and the District of Columbia.

One grantee, the 54-A District Court in Lansing, Michigan, used the funds to hire a facilitator, Ulices Rosa, who in his second week on the job was able to help a woman who was sleeping in a car with her daughter and grandchild find temporary emergency housing while they look for an apartment that will accept a Section 8 housing choice voucher.

“What we have found is that courts aren’t often accustomed to partnering with other service providers,” says Samira Nazem, court management consultant for the National Center for State Courts. “It’s not necessarily the court providing these services. It’s generally a combination of mediation, legal aid, pro bono attorneys, sometimes housing counselors and financial counselors.”

The sheer breadth and diversity of the judicial system means that courts can be true laboratories for democracy. Some state courts are unified, investing administrative and budgeting authority in the highest court, while in non-unified states, each county is its own rule-making authority — to name just one feature of the judiciary that makes eviction diversion efforts necessarily complicated and ultimately local. In April 2021, Urban Institute researchers scanned 47 state and local programs and came away with a few core takeaways, with the biggest, perhaps, being the importance of the federal emergency rental assistance program.

The $47 billion bailout for renters provided the leverage to bring landlords and tenants to the table for mediation as well as the support to expand eviction prevention as a national concern. In Texas, for example, the eviction diversion program launched as a pilot using Community Development Block Grant funding and expanded to a statewide effort with emergency rental assistance program funds; the program will continue until the federal funding runs out.

With rents still rising nationwide, federal emergency funds running low and Congress stalled out on additional spending, the clock is ticking for efforts to make sure the current ebb in evictions continues.

“We have given lasting reform a jump-start,” said Gene Sperling, senior advisor to the president, during the summit. “Now the question is, are we content to let this first ever national infrastructure for eviction reduction crumble? Or are we going to build on it and strengthen it and make permanent gains?”