As NYC cleans up from Ida, landlords won’t be fined for illegal basement apartments 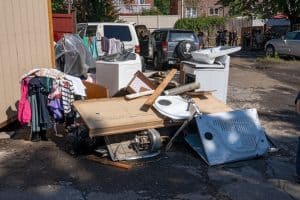 NEW YORK CITY (WABC) — Landlords will not be fined for operating illegal basement apartments in Ida-affected areas for the rest of the year, Mayor Bill de Blasio said Wednesday, as the city attempts to get residents displaced by the storm back into their homes.

The deaths of 13 people, 11 of them in basement apartments and five of six which were illegal, according to the Department of Buildings, has prompted a crackdown on illegally subdivided apartments in the city.

The city believes there could be as many 50,000 illegal basement apartments citywide, housing more than 100,000 residents.

“(Because) those unfortunately illegal basement apartments (are) in the areas affected most deeply by Hurricane Ida, we will not be issuing fines for the rest of this year,” de Blasio said. “Our goal is to get folks back to those apartments.”

The mayor said some of the homeowners were very honest about not having tenants in apartments fully not up to code and that 2,000 homes have been inspected for damage from the storm.

“We’ve got a lot of work to do on the basement issue,” he said. “It is a very, very difficult one, but right now, we don’t want to put homeowners in a double jeopardy. They’ve just been through a horrible storm. We don’t want to hit them with additional fines, we don’t want to have a situation where someone living in a basement apartment has nowhere to live.”

Less than 300 residents have taken up the city’s offer for emergency housing in a hotel, although that is expected to rise.

Officials also said that 1,400 cars have been towed and at least 9,100 tons of storm debris collected.

President Joe Biden toured flood-ravaged Queens on Tuesday and promised help is on the way.

Biden spoke after walking streets in both New York City and New Jersey, meeting people whose homes were destroyed or severely damaged by flooding when Ida barreled through and dumped record amounts of rain onto already saturated ground.

The president said he thinks the damage everyone is seeing, from wildfires in the West to hurricane havoc in the South and Northeast, is turning climate-change skeptics into believers, but years of unheeded warnings from scientists, economists and others mean time for action is short.

“The threat is here. It is not getting any better,” Biden said. “The question is can it get worse. We can stop it from getting worse.”

“We really appreciate (Biden) being here,” he said. “We hope he does a little bit more though. We want him to do more more with climate action. This is definitely caused by climate change.”

As neighbors clean up, the state and federal government is offering assistance in ways big and small. While state workers hand out bags of food, FEMA is offering up to $36,000 for losses not covered by insurance.

The challenge now is to make sure the immigrant community knows about it.

Governor Kathy Hochul took a moment to mourn, placing flowers at the home where a family of three died when their basement flooded.

“I’m more than a governor of this state,” she said. “I’m a human being. I’m a mom. A mother, a father, a child were lost in this place. You can’t help but have it affect you. But what you do with that is what makes the difference.”

The Red Cross is also offering $515 debit cars to help people get back on their feet, and de Blasio said the city will pump out the basement of anyone who can’t afford a contractor.

Read more
Landlord’s Guide to...
Whether or not you’re a pet lover, pet-friendly buildings tend to be much more attractive to pet...
Read more
How Technology Has...
It is often said that necessity is the mother of invention, but just as often, a technology is created...
Read more
Neighborhood Ratings...
Neighborhood Ratings and Community Safety When people imagine their neighborhood, they usually picture...
Read more
ShowMojo 24/7 Live...
Over a decade ago ShowMojo pioneered Leasing Automation. Now, ShowMojo automatically responds to every...
Read more
Realtors still get most...
Over half of Realtors said that social media was their top lead-generating technology tool, according...
Read more
Room to Grow:...
Over the past decade or so, the multifamily industry has undeniably become more pet-friendly. Go to...
Read more
COVID-19 Led to Higher...
Student housing operators were adversely affected by the COVID-19 pandemic in 2020, according to a...
Read more
Apartment Amenities Get...
Although government requirements related to the pandemic have lifted, not everyone is ready to return...