Home·Property Management·Are we in a recession?

Are we in a recession?

There’s been a lot of talk these days about whether the US economy is in a recession or not. And this has been muddied by the fact that the White House recently made an official declaration that this determination is based on a vote by the National Bureau of Economic Research (NBER), not the more popular rule of “two successive negative quarters of GDP.”

Given all the confusion, I wanted to take some time to dig into the question of how recessions are historically declared and what that means for where we currently are economically, both from a “technical” standpoint and from a “realistic” standpoint.

How Are Recessions Historically Declared? 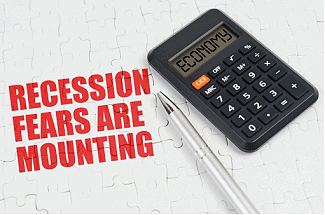 Let’s start with the question of how and by whom recessions have traditionally been determined, and from there, we can jump into the question of whether I think we’re currently in a recession.

Yes, NBER is the organization that has historically been the final arbiter of when a recession has started, ended, and how long it has lasted. They have been dating recessions since the late 1920s. And they created their recession dating committee in 1978. So, they’ve been doing this for nearly a century, and they formalized the process nearly a half-century ago.

They are a non-partisan organization, and it has a group of bi-partisan economists who meet whenever they feel it’s necessary to make determinations such as whether we’re currently in a recession, where the trough of the recession was, or whether a recession has ended.  If, like a lot of us, you use FRED (the St. Louis Fed website) to track economic data, you’ve probably noticed that there are gray vertical bars throughout all the graphs that denote previous recessions. These grey bars – including where they start and end – are determined by NBER.

Now, you might ask, “if NBER doesn’t use two consecutive negative quarters of GDP, how do they determine if we’re in a recession?”

Well, it’s a bit more nuanced than any single piece of data (as it should be). Their official criteria for a recession (from their website) is, “a significant decline in economic activity that is spread across the economy and that lasts more than a few months. The committee’s view is that while each of the three criteria—depth, diffusion, and duration—needs to be met individually to some degree, extreme conditions revealed by one criterion may partially offset weaker indications from another.”

But, here’s the important point:

NBER doesn’t attempt to make real time calls on recessions. It often takes them months or even a year or more to make a declaration, as they view their job to historically document economic events, not to call them as they happen. For that reason, the media has gotten comfortable using the “two successive quarters of negative GDP” rule to avoid having to wait for NBER to make a determination (more on that later).

Which leads to the obvious question:

Has NBER’s definition of recession ever deviated from the “two successive quarters of negative GDP” definition?

The answer is Yes. In fact, it’s happened in two of the past three recessions:

During the Great Recession, NBER called a recession starting in December 2007, despite the fact that we didn’t have two consecutive negative quarters of GDP until the end of 2008.

Neither of these recessions were officially declared based on two successive quarters of negative GDP.

To finish up an earlier point I was making, NBER often doesn’t meet until well after we start to see recessionary effects on the economic, and in many cases will declare a recession (or a trough) well after the occurrence. This makes sense, as it’s often difficult to observe economic shifts in real time, simply because we don’t get economic data in real estate. It can take weeks, months or even several quarters to get historic data and to put the pieces together to determine exactly what happened in the past.

All that said, I’m perfectly comfortable allowing NBER to ultimately declare recessions, as they been pretty good about it in the past and, with the exception of the misstep by the current administration, there’s never been any partisan push-back from either side.

ARE WE CURRENTLY IN A RECESSION?

Which leads us to this question: Does an official declaration of a recession even really matter?

Recession is a just a word, and it doesn’t change any official policy.

Isn’t it more important to have a handle on how the economy is impacting the people and the businesses in this country, so that we can be adjusting our financial decisions — regardless of whether an official recession has been declared?

I believe so. And there are a number of factors I would look at to make a personal determination of whether or not we should be considering the US as currently in a recession:

Let’s start with the one everyone likes to look at – GDP. While I’m a big fan of looking at GDP numbers to determine the health of the economy, it’s important to be aware of situations where the numbers may not be fully representative of the current state of the economy. For Q1 and Q2 of this year (both negative GDP), there were a couple idiosyncrasies in the data worth noting.

First, thanks to supply chain issues in 2021, many businesses stocked up on inventory in Q4 of last year, spending a ridiculous amount of money to pack their warehouses. To the tune of 6.9% GDP growth in Q4, the second highest since the Great Recession. But, with warehouses packed with inventory, businesses haven’t had to spend nearly as much money in the first half of this year; and that reduction in business spending accounted for a large amount of the GDP drop between Q4 last year and Q1/Q2 this year.

Second, trade plays a big part of GDP. Exports boost GDP numbers. Imports hurt GDP numbers. Thanks to an historically large trade imbalance since mid-2020 (and hitting it’s peak in March of this year), GDP has looked worse than it normally would with more typical trade imbalances. While heavy importing isn’t indicative of a weak economy (just the opposite, in fact!), it hurts GDP and makes the economy look weaker than it otherwise would.

So, when it comes to GDP, yes, we’ve seen two successive quarters of it being negative. But, had just the two factors I mentioned above been normalized (and again, neither of them were a result of a weak economy), it’s nearly certain that GDP would have been positive in both Q1 and Q2 of this year.

This is probably the most important metric to be looking at when it comes to economic health. Simply because this is the most indicative metric of whether Americans are financially stable or unstable in the current environment. And while it may change at some point soon, there no argument that employment metrics are continuing to look strong.

We haven’t seen July numbers yet, but for June, despite the talk of layoffs (especially in the tech sector), the number of permanent and temporary layoffs in June was almost equivalent to the preceding couple months.

Long story short, while unemployment data has a lot of caveats in this post-Covid world, there’s no situation in which we can say the current unemployment numbers aren’t still very strong.

We’ve been hearing a lot about high inflation being an indicator of a weak economy. And while high inflation is certainly a major pain point for both consumers and businesses, it’s actually an indication of an economy that hasn’t yet weakened.

Don’t get me wrong – the increase in interest rates is likely to drive inflation down, and take the economy with it, but this hasn’t happened yet. The big question remains about whether inflation is mostly demand-side (driven by strong consumer spending) or supply-side (driving by supply chain issues). I personally believe that we’re still seeing major supply chain issues, which are leading to the spike in inflation, but many people will still argue that inflation is being driven by strong consumer demand.

If that’s the case, this is actually an indication that we have not yet entered a recession and that consumers are still relatively healthy.

There are plenty of other economic metrics that we can look at to determine whether the economy is still holding up or whether we’re in the midst of a downturn, and without going into too much boring detail, the takeaway is that things are still looking as if we haven’t gone over the cliff.

The yield curve is flattened/inverted, which is a bad sign. But, it’s historically a sign of what’s to come, not a sign of where we are today. And bond and mortgage rates are leveling and dropping, indicating that risk premiums are dropping, which is a sign of investor confidence.

In the toilet. Specifically, the worst we’ve seen in the 45 years that the data has been tracked. June numbers were even worse than at the depths of the 2008 recession.

And again, while I would use this to determine the current health of the economy, it’s definitely an indication of where the economy is headed, and potentially how quickly.

So, would I say that we’re currently in a recession?

Well, if you were to remove that last data point – Consumer Sentiment – I think it would be hard to argue that the economy is in a place where we could say that there’s been a significant widespread decline in economic activity.

In other words, not a recession.

But I would give that Consumer Sentiment metric a good bit of credence. And with that number so strikingly low, while I don’t believe we’re currently in a recession, I would certainly consider that we are likely on the verge of one, and we should assume that most Americans will start making financial decisions that would indicate we are in one.

Long story short, while we can argue all day about whether we’re in a recession or not, there’s little doubt that many Americans are getting ready to start acting as if we’re in one.