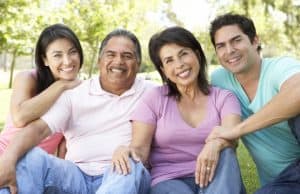 ATLANTIC CITY — Toni Wilson, the mother of four children ranging in age from 15 to 3, moved from Egg Harbor Township to Atlantic City to save $100 on her monthly rent.

Working part-time as a cocktail waitress at the Golden Nugget Atlantic City casino, Wilson, 39, was paying $1,300 for a three-bedroom, one-bath ranch-style home that was at least 40 years old and needed repairs. She also had to pay the water bill.

Wilson, who was married previously, moved to the Inlet section of the city to an apartment where she pays $1,200 in rent in addition to separate gas, electricity and water bills. She has three bedrooms, 2½ bathrooms, a kitchen, a small backyard and a garage.

“They did not want to move at all,” Wilson said of her children. “She (daughter Amirah Elliott, 15) was on the cheerleading team at Egg Harbor Township. They hadn’t lived in Atlantic City for five years. City life is different.”

Wilson is one of many South Jersey residents who live in an apartment with a family and struggle to pay the market rate for rent.

Without financial assistance from her father and her boyfriend, Wilson said, she did not know how she would be able to survive.

“Sometimes, internet is off. Sometimes, cable is off,” said Wilson, who added she learned from her mother that rent and transportation must be paid. “I juggle the rest of the stuff all month.”

The need for apartments — due to delayed marriages, an aging population and immigration — is creating more demand at a faster rate than new apartments are being built, so those that do exist are more expensive.

For years, rent growth has outpaced wage growth, and a severe lack of affordable housing affects many parts of the country.

The number of households that spend more than half their income on rent has grown about 25 percent since 2007 and are considered “severely cost-burdened,” according to an analysis by the Joint Center for Housing Studies of Harvard University.

“The rental market is as hot as the for-sale market was back in 2005-06. There are 100 people looking for every single rental,” Shamberg said.

Shamberg said there have always been people who rented apartments as opposed to buying a house because they didn’t want the responsibility, didn’t understand the value of owning a home or weren’t ready for the responsibility. Others wanted the flexibility of being able to move.

But since the recession, an increasing number of people have been tagged with a bad credit history, don’t have the money to buy or have lost their previous home due to foreclosure and can’t buy, Shamberg said.

Rising rents are an extreme problem, and many people are struggling, said Matt Shapiro, president of the New Jersey Tenants Organization, based in Fort Lee, Bergen County.

“Low and moderate incomes can’t afford today’s rents, which are astronomical and unbelievably high,” said Shapiro, whose organization is the oldest and largest such statewide organization in the country.

Rent control is an answer, but it is not the answer, Shapiro said.

Even if a landlord raises the rent 4 percent annually, inflation has been as little as 2 percent, so the landlord will make a profit, Shapiro said.

Good rent-control legislation should allow the landlord or owner to set a profit level that could be maintained.

“Instead, in some city markets, landlords are doing extraordinarily well,” Shapiro said. “Mortgage interest costs have been slashed. They (owners) could afford to do rent control and still make good money.”

Rent control is part of the problem in some communities because rent control laws allow landlords to charge whatever they want once a unit is vacated, said Jeff Cronrod, a board member of the American Apartment Owners Association, based in California.

“We have the end of the middle class, which is fairly topical, and that’s really what this is about, and you have the haves and the have-nots. The separation is bigger than ever,” Cronrod said.

One thing landlords in his association are starting to do is adopt what’s called LeaseGuarantee, which allows the landlord to eliminate or reduce the money needed for a security deposit, which at least makes the apartment more affordable to move into initially.

In the meantime, Wilson will be doing the best she can, making payment arrangements and providing a little less food sometimes if necessary. She has not experienced a winter in her new place, so she doesn’t know how high her gas bill will be.