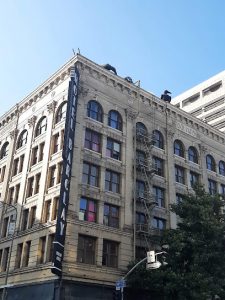 The turn-of-the-century Barclay Hotel in Downtown Los Angeles was most recently slated for a makeover as a boutique hotel, but its new owners plan to return the property to its previous use as low-income housing.

The AIDS Healthcare Foundation on Friday announced that it had purchased the property and would be updating and reopening it as housing through its Healthy Housing Foundation for tenants who are extremely low-income and/or formerly homeless. The sale closed this week for $21.75M.

The seller of the property is an LLC connected to Michael Delijani, according to public records. The Delijani family owns a number of historic Downtown properties, including the Tower Theatre, which reopened in June as an Apple store, the Los Angeles Times reported. A Delijani-owned entity, Golden Hills Properties, purchased the Barclay Hotel property for $21M in 2018. At the time, the property had been on the market for $40M.

“Due to the enormity of the homeless and housing affordability crises, we need viable solutions that are economic and fast because communities — and the people in those communities — simply cannot wait any longer,” AHF President Michael Weinstein said.

AHF has been a vocal advocate for and adopter of adaptive reuse as a way to lower costs for creating housing for residents transitioning out of homelessness and extremely low-income renters. It purchased its first hotel in 2018 in Hollywood for that purpose, and this purchase marks its 11th hotel or motel bought for the model. An AHF spokesperson noted that the purchase price works out to just over $137K per unit, a far cry from the average price tag for ground-up units.

But there have been a few issues along the way, with some residents complaining and even suing over conditions at AHF properties. Weinstein has acknowledged the legitimacy of some of the claims but put the blame on the city, not his organization.

There are 158 units in the Barclay building, 19 of which are occupied, according to AHF. Those residents will stay in place or move into refurbished units in the building once they become available, an AHF spokesperson said. The organization will be renovating the building and expects that it will be at least four months before people begin moving in, the spokesperson said.

Read more
Amenities go wild at...
As part of your rent at the new $300-million apartment building called Kurve on Wilshire, you can get...
Read more
Detroit leaders call...
DETROIT — Public officials and leaders in Detroit are calling for policy changes and programs to...
Read more
Proper Documentation...
This article was contributed by the Fair Housing Institute.  Why is documentation so important? How...
Read more
Most CRE Firms Mum On...
In the few days after President Joe Biden's administration issued a rule requiring large employers...
Read more
New York To Suspend...
The state plans to pause its Emergency Rental Assistance Program for struggling New Yorkers on Sunday,...
Read more
Spending Money to Make...
It’s a fact – in order to get the best rents from the best tenants, your property needs to...
Read more
Ballot initiatives to...
A slew of initiatives aimed at the addressing the nation’s housing crisis passed on Tuesday, a test...
Read more
The entrepreneur behind...
Langley Steinert’s new site, ApartmentAdvisor, is aimed at finding rentals that offer good value for...